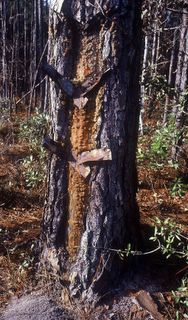 So what is this?
Answer: This is called a catface. It's a vanishing part of the south, but represents an industry that was once HUGE. Pine trees like this were cut with shallow V shaped cuts that caused the tree to "bleed" sap. The metal strips were nailed on to guide the thick pine sap down to a clay collecting pot (which is not shown). The "turpentiners" would come along every so often, collect the sap, and process it into "Naval Stores"...turpentine, pitch, etc.

Imagine working with sticky pine sap in the heat, humidity, and bugs of a southern pine forest. The catface was rescored over time to keep the sap flowing so it eventually becomes thick with hardened sap. It is usually the last part of an old turpentine pine to rot since the hardened sap acts as a preservative. The tree in the picture is still alive, but finding a dead catface is a gold mine if you have a fireplace...yes, we have them in Florida. The high concentration of resin makes the catface incredibly flammable and the very best kindling wood. We call this "Lighter" and it is hard, dense, and extremely aromatic with pine scent.

A few slivers of thinly split lighter will get any fire going in no time.

A misguided and futile attempt to repair a lightning-damaged tree?

(BTW - you get extra points for the really long ladder for getting out of the lake comment. I should have seen that coming!)

You trying to get pitch outta that pine?

Okay bloggers, looks like Swamp got the best answer on this one.
This tree was once a turpentine tree, and was set up to collect pine sap. I am going to edit the post for a more complete explanation.

Sure looks like the way they make Maple Syrup, only a lot stickier. Oh, by the way, don't put that pine sap on your hotcakes!

Around here they call those stumps "lightwood" and in the piedmont and mountains I have heard it called "lightern."

Seems kinda funny to make turpentine out of pine pitch. When I was a kid we used turpentine to get the pitch off our hands and feet. (We also used to gather "pitch" from Jeffrey Pines and chew it like gum. What were we thinking and where were our parents?)

I have been told they use ground up lighter wook in the dynomite making prosess any truth to that?

Ooops where is the spell checker on this blog

Rick,
I don't know about that. I know when dynamite was first invented they used sawdust and some other packing materials for holding the explosive (nitro-g I think) stable.

I just found 4 drip pots in my back pasture. Well didn't just find them, but didn't know what they were.

Thank you for sharing this information with us. You always inspire us.