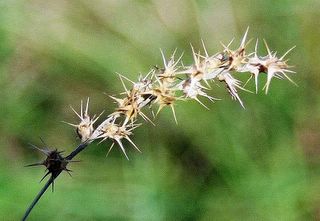 It is silly and unproductive to hate a plant, but I really hate this plant. I'm not sure how far north Sandspurs range, but anywhere north of Venezuela is too far north for me. I don't like 'em.

They like sandy soil and can tolerate drought, cutting, fire, and most other nonchemical means of control. The points are lightly barbed and really pointy and painful.

Sandspurs are sneaky. As you walk, they leap onto your socks, cuffs, and shoe laces, so that later you will be impaled as you take off your clothes.

The plant, a grass, is just trying to spread it's seeds, but I hate 'em too much to be impressed by their clever survival adaptation.

If you mow more often (who wants to mow at all?) to prevent seed production, the plant produces the spikey seeds sooner and on shorter stalks.

If you burn, the sandspur says, "Why thank you for the lovely nutrients and lack of competition"...and grows accordingly.

One thing that has helped...some, has been to drag an old terry cloth towel through an area where they have started growing. The spikey seeds practically leap onto the old towel. After dragging, the towel is burned or thrown in the garbage.

I used to get stuck twice by these spikey seeds. I always seemed to stick my fingers when I tried to pull a sandspur from some other punctured area of my body. It's hard to grab one and avoid the spikes.

Then my father in law said, "Lick your fingers before you grab it"

It works! I guess that tiny bit of moisture softens the tips of the spikes enough so they bend instead of driving through your skin.

FC,
We used to have cockle burs and stick-tights in Missouri. They were a pain, but not painful! FYI - Dandelions do the same thing when cut down before they go to seed. They flower again at the height that they were cut off, just below the mower blade. Crafty little buggers!

We even have them, or a close relative, in Minnesota, though fortunately I haven't encountered them here at Sand Creek. Ten years ago I lived in a subdivision on what is called the Anoka Sand Plain, an old glacial lakeshore north of Minneapolis, and...you guessed it...sand burrs everywhere. Ouch.

i haven't seen them, yet, in washington, but california has star thistles. the seeds look like those sandspurs. it takes over meadows, or fields, or pastures. ouch. barbed spikes. and poisonous to horses.

ThunderD,
Yes, my dandelions are sneaky that way too.

DPR,
I guess every region has their spikey pests. Goes with the territory.

There are some folks who live on the French Broad River in Hot Springs (NC), and for a while they were driving a camper back and forth from FL. They now have a big, gorgeous field full of sandspurs!

grrr..they drive me crazy. nice tip on the licking ur fingers part.

i hate 'em too. that's how i ended up here. was gonna do a search on "are sandspurs important to the ecology", and instead just searched on "sandspurs". they are wicked! as for the dandelions mentioned, check out how useful they are, for medicinal and culinary purposes. and they dont stab ya! :) enjoyed the post.

i live in North Carolina and i hate those things worse than bills. I cant buy anything that helps. I will say that Bonus S Max, in a purple bag at lowes seemed to help for awhile but they did return,

Ah, come on, you sissies, you gotta grow up in Florida and have sand spur fights to really appreciate them. Pick em and fling them at your best buddy, then run! Yahoo! Now that's living!

I dont like getting out of bed and stepping on a spur. They are tracked in all over your carpet and on my carpet in the car. My little girl even had to throw away her favoirt dress because she feel off her bike into them. HATE EM !

Ours are not really the sandspurs talked about here but rather a low growing bush type and much stronger, viscious than grassy sandspurrs. They are spreading rapidly on the beach close to the grass and dunes. yard man called the huck burrs. Whatever they are - they are very very mean and we need to get rid of them. Of course FL beach rules will put you in jail if you mess with the fauna. Not sure what to do - but we are quite desperate to stop the growth.

you all have forgotten grenades
retired raven

The sting they leave behind! We pulled them up by hand then fertilized for the seasons in a row...so far so good :)

Carry a small comb and use it instead of your fingers to extract the sand spurs. Works on people and dogs too!

I didn't know what you'd call them until I mentioned them to my older sister who lived near St. Pete, Fl 1n the 50's, 60's and 70's, These things are miserable... and so excruciatingly painful.

Was in Port Charlotte for 10 days and say a sign on 41 for Easy street. Thinking it was a perfect pic, I pulled over to take a picture. Well, walking through the grass in flip flops proved to be not the best idea. Spurs all over my feet, pants and shirt. I panicked and hopped around screaming and shouting (I thought they were little insects attacking me). I never experienced or saw spurs before. Long story short, I jumped out of my flip flops from sheer terror and ran back to the car for help from my mom. She explained it to me. The tip of two spurs broke off in my foot. Removed it with some trouble. How embarassing. Yes, I too hate this plant.

I mentioned these to some friend of mine. They get a seed spredder fill it with lime and cover the yard. They say this will kill the plant that grows them. Will be trying it, will let you know if it works

I grew up with them in central Fl. hated to get into them unaware. But! 4 of us brothers plus friends and neighbors, we had many a "Sand Spur war."

Pick them at the stem -leaving the spurs in place- then attack the other guy. You don't know them until you get a pod of them slammed into your back. Ouch!!!

I had to laugh at some of the stories here although I know its not funny when it happens to you.. how ever I can relate.The house my fiance and I got a few years back is covered with them front and back yard somthing fierce.. no matter how often he mows the front and back yard once or twice a month.. they are still there, if the wind blows they spread . one good thing no dogs will go potty on the lawn lol

They call those Sand-burrs here in MN, and anyone complaining about stepping on Legos has never stepped on one, they are Nature's own caltrops.