Butt Shavings And The Return Of The Prodigal Project 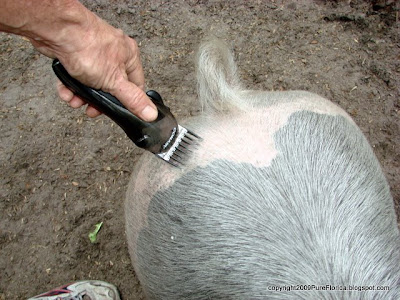 The Suwannee River Livestock Show and Fair is this weekend and will run into next week. As always, we are hoping Junior's show pig makes the weight, (230-280 lbs) and gets to compete.
One of the things that happen prefair is a haircut for Porki.

So yesterday, since Junior had both track and soccer practice, the role of "swine barber" fell to me.
Porki was pretty good for the beauty session. This does not mean she stood still of course. Essentially it was a barberballet. She shifted, I shifted, she walked over to eat, I walked and shaved at the same time, she turned, I shaved whatever side she gave me.

By the time the battery charge ran out on the trimmer, I had her hair knocked down a couple of inches and ready for the final trim, which will happen today.
The idea is to accent her buff musculature ... you guys who shave your chest hair can relate. I rigged up the green pig transport cage at the end of the pen chute so she can get used to walking into it this week. On Saturday, I will set the green cage on my low trailer and place it back in this position with a plywood ramp for her to walk up and into the cage.

Then she will head to the fair. 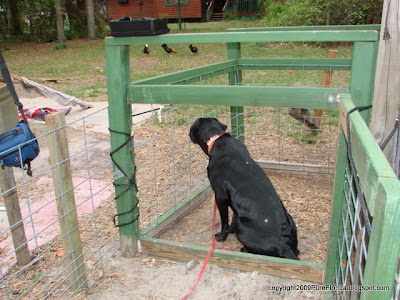 I lifted Bear up (ummph!) and over the hog panel fence to let him in with the pig. I thought it would be fun to watch them have real contact.
The pig wasn't too interested in Bear and Bear showed only a passing interest ... butt smelling mainly. For Bear, the slow motion chasing of the chickens by mostly blind Flounder dog was much more interesting and his attention was soon focused elsewhere.

He is wearing his new 20 foot long training lead which allows him some romping freedom, but limits his runoffanicity when a deer scent or girl dog scent catches his fancy. This leash has been a great improvement over the short 6 footer we were using since he feels free and the constant tug O'war has ended.

Unfortunately for me, I was still connected to Bear when I lifted him OUT of the pigpen chute. For a brief moment, as he dropped to the Earth from my arms, all was well, but as soon as his paws hit the sand, he blasted off after the nearby chickens which had been driving him crazy the whole time I was pig shaving.

I could see the disaster unfolding and I lept up and over the fence, but the 20 feet of lead had already played out and I offered little resistance to Bear's might since I was vertically airborne at the moment.
I landed about 6 feet away from the fence with a skinned knee the only damage.
Life with Bear is never boring. 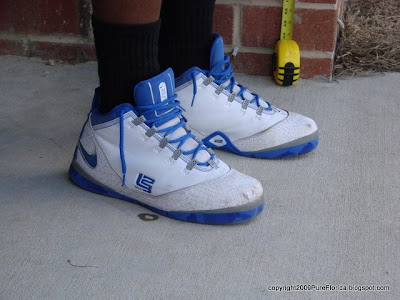 The feet above belong to Frank. Longtime readers know about Frank, if you are new, search this blog for him.
His time away turned out to be a temporary stay at a facility and he has been back for a few weeks.
His behavior is great and grades are good.
The picture was taken yesterday. I was helping him with his science fair project since he did not have a camera and needed to photograph part of his "experiment".
He is testing whether different brands of basketball shoes affect vertical jumping height.

Like all the other students, he has waited until the last minute ... which makes him perfectly normal in my book.
Posted by R.Powers at 7:33 AM

Yay Frank! So glad he's back where you can influence him "right!". (The other stuff was interesting too--glad you weren't too hurt!) But Frank warms my heart...

Good for Frank! Sounds like a cool project and it's great that he has you to help him. I'd be interested in his conclusions. :) When I taught down South, I used to hear kids talk about a new pair of shoes being "fast." I hadn't thought about vertical advantage!

Frank is back, behavior is great, and his grades are good.

FC, I'm sooo glad, both for Frank and for you.

Does he read your blog? Can you tell him a lot of people are rooting for him?

I am so happy that Frank is back. Good for him that he was able to keep his grades up.

In the first photo with Bear, Bear looks like he's wondering what kind of dog Porki is!!

Glad Frank is back and doing well. Which reminds me, Starflower has a science project she needs to do. I'm sure it will end up being done at the last minute.

I'm so glad Frank's back and doing well!!! ZBoy and I were up until 10pm last night making a mobile of Condoleezza Rice. Since when is a mobile a proper report? This is defninitely new since I was in school!!!

Ah - I can attest to the fact that life with dogs - especially BIG dogs - is never dull!

I'm glad Frank is back! He's still in our prayers and I really hope he beats the odds that seem stacked against him.

I hope Frank knows how many people are rooting for him, and how lucky he is that one of them is you.

Trying to get the image of a mobile of Condoleezza Rice out of my brain.

I am so thrilled that Frank is back. Seriously. I don't even know this boy yet I find myself rooting for him.

Hooray for Frank! Hooray for you! Bad Bear, Bad Bear. And so long to Porki, who remains nameless so that your readers will not get attached to her and show up at the fair with protest signs and pitchforks!

Kimberlee,
Remember the ads for PF Flyer sneakers? They claimed you would run faster and jump higher.

Lesle,
It's very heart warming to hear you guys rooting for him. I don't really share PF with my students, so no he does not know, but he knows I'm on his side.
As long as he does the right thing.

Deb,
Yes, the title is a bit odd. Good luck with that project! heehee

Sayre,
I'm with Marge down below, I just can't get that image out of my head.

SCMomma,
It was like grabbing a truck as it went by ... whoosh and I was airborne.

Marge,
He doesn't know, but I will channel that energy to him! The Condy mobile seems funny to me too.

Jean,
He may just make it. Thanks for caring.

Cathy S,
You don't know how true that is... PETA reads my blog apparently and sent an email to my school about the shark dissections.
I suppose they would disapprove of the fair too.

Thank God the shavings were from Porki.

Freste,
We are in complete agreement on that.

Dammit Freste! Coffee doesn't taste good when it going up my nose. ;0

Glad you got Frank back FC. I think all of us in bloggerland were sad when he left.

Go Frank go! I'm glad to hear he's back and getting back on track. He's a lucky boy to have you in his life!

I would have loved to have seen video of all of this. You shaving the pig as he walks around, Flounder chasing the chickens in slow motion, and most of all the flying lesson that Bear gave you. Sorry, but I also laughed myself silly when I read this post.
Good luck to Frank. Sounds like he's really making an effort to do right.

Great news about Frank....really, really great news. Nice job on the prickly pig paring. One farm job I have never done. Hope she does great at the show. The crate mechanism is ingenious!
I just read up above about the email from the animal rights organization. Please don't let them get you down. They used to write the editor of the paper I work for too, but either they gave up or my boss stopped printing them. Either way keep up the good work! Please.....

Thanks for keeping us up-to-date on Frank!

yay! for frank being back. i hope he stays that way.

Yeahhh! Frank is back!!! I just sat down with a cup of coffee this morning and when I read that, a big old grin slid across my face. YES! I hope he does well, I am SO rooting for him!!!

And you know what, Bear is getting BIG! How much does he weigh now? He's filled out his height, I think. What a good lookin Labrador he has become. :)

Just Right,
Thanks! Work in progress.

Debbie,
I am definitely going to get a video of Flounder's slow motion chicken chasing. It is funny and pitiful all at the same time.

3C,
I just can't stomach them.
This pig haircutting thing IS pretty odd.

SNB,
Will do ... we have about 5 more years til graduation.

Laura Late, But Always Appreciated,
Thanks!
Bear was 80 pounds months ago, and he hasn't had a weigh in since then, but he feels like 100 lbs to me! I will pass along your compliments to him.
As if his snuggly sweet head isn't big enough!

Wow! :)
This is an awesome collection of new ideas!
Eagerly waiting for more valuable articles.
You would feel more happy to read similar one from here-
https://topshoesbrand.com/