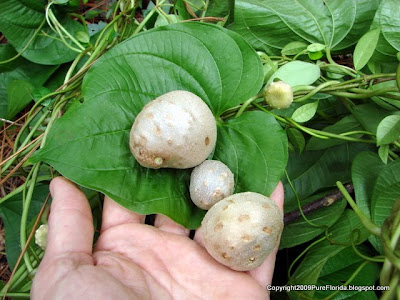 This is air potato, an exotic vine from Asia. I liken it to Kudzu, because it has that ability to engulf disturbed areas and smother native plants with it's rapid growth.
Unlike Kudzu, air potato has no redeeming qualities ... Kudzu does have a few .
Airtaters are a member of the yam family, but the taters are bitter and according to IFAS, possibly poisonous. Each little tuber ... these are born aloft on the vine, not in the ground, can start a new plant. This makes removal pretty tricky, because if you miss one, you start over again. Around Florida, communities organize "Air Potato Pulls" where volunteers head out on a Saturday and try to strip the vile beast from some natural area it has invaded.
The air taters in the picture are from a little Air Potato Pull my Mom and I conducted one morning recently. We were walking around with Bear when I noticed that air potato had crept over the fence from the house behind hers. It was intermingling itself with the well behaved Confederate Jasmine that covered the fence, so herbicides were out of the question.
We spent a pleasant hour in the shade talking and stripping air tater vine from the fence.
It didn't seem like work at all.
Perhaps air potatoes do have one good use, besides inspiring quality time with your Mom ...
They make pretty good ammo.
What?
When I was a kid, there was a big clump of air potato vines growing at my Papa's house and generally throughout the neighborhood. One day, my cousins and I were there at our grandparents, when we wandered down by the street near Papa's garage.
About that time some boys from the neighborhood walked by, words were exchanged as boys often do ... girls too these days, sigh.
Then someone picked up an air tater.
... And they threw it.
At us.
Well, allllrriiigggght!
We probably set back the control of air potato a few years by tossing the viable tubers near and far, but no one back then ever worried about the spread of exotics.
I don't recall how many air taters were thrown that day, but I do know they sting when they hit you. In my memory, it was an epic battle, although in reality it was probably more of a skirmish. And when it ended, it ended. A draw as I recall, with no 9mm's being drawn, no drive-by shooting later in the day.
It may be a bit nostalgic, but it seems pretty harmless now. Some air taters tossed between two different tribes who met on the trail ...
Posted by R.Powers at 5:05 AM

That is weird, I have never heard of them. There I go again learning something from Floridacracker! Thanks!

always SOME reminder we ain't livin' in Eden despite what the Florida Tourism Dept says. Heh.

Seems to me that purple variety of thurmbergia is jes' as bad--dang, I have poured roundup all over the roots of one that WILL NOT DIE.

Air taters are benign indeed compared to the ammo the boss and his brother used in similar circumstances....rotten goose eggs.
Although on the plus side they didn't sprout. lol

Air taters are a food source in Asia, where they originate.

I suspect that they've been labeled "poisonous" to deter people from cultivating a very destructive plant.

That said, I've never had the guts to try one. I do "pulls" when I do find them: they nearly collapsed a tree in the yard of my last apartment. It's the weight of the taters that do the most harm.

I have always wondered about the one person in a tribe who throws the first air potato at a stranger on the trail.

FC,
I hate them air tater thingys. I have been at war with them since I bought my house 16 years ago. Last year after shoulder surgery I skipped my annual harvest. Now I am reaping the benefits. They are everywhere!!!. They cover up palmettos, trees, bamboo, my deck there is nothing they will not climb and destroy. GRRRRR! We did have some epic battles in my neighborhood as kids with the taters, though.
Billy

I spent a whole day pulling air potato vines out of a local park for community service. It was actually really fun!

Alan,
Glad to be of service.

Lisa,
You are welcome. I don't think you will ever have to worry about this one up there!

Aunty,
That is a bad one. Tougher than Roundup!

CLJ,
I thought they might be. Even the IFAS site says they were spread by the polynesians. Seems like they only spread something they could use.

Robin,
Heehee. You really did make me laugh out loud with that comment.

Billy,
Sounds like you have your hands full.They are persistent pests.

Emma,
I forgot about that! Must be genetic!

Our boys and their friends had a game throwing them at the stop sign by the house.Don't ask what it was but points were involved.....It was a constant "thump-thump-thump" around here,for years.
Now,we just hate those things!At least they pull up easily.When all else fails,Round-Up kinda sorta works.

What is the best chemical to kill the air potatoes