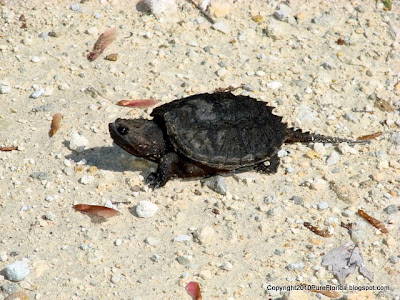 This youngster was crossing a limerock road last week just as I came around the bend. 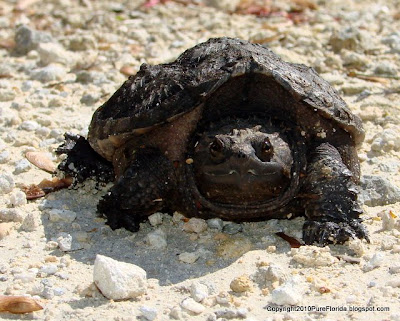 This is the sharp end of a common snapping turtle ... best to avoid it with your digitation or any other dangly parts that you value. 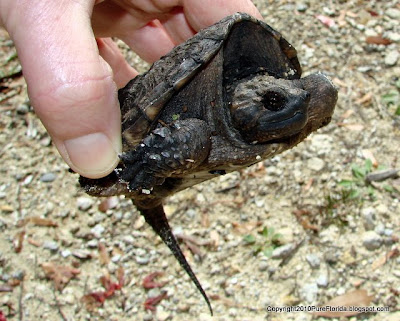 If you are going to move a snapper off the road, finger placement is important, although it's a lot simpler than grabbing a live blue crab. 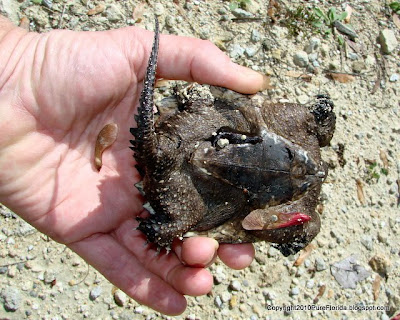 Snappers don't have much of a plastron. I guess they can forgo a little armor due to their normal snappiness. This one was pretty mellow and never snapped or did anything defensive.
See the hitchhiker in that photo above? 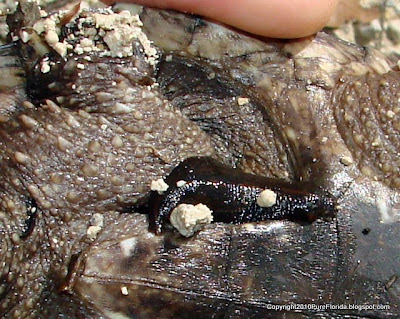 How about now?
That earthworm cousin attached to the snapper is a leech.
Man, leeches SUCK!
(hee hee)
Actually, leeches suck from both ends, but only one end sucks blood.
The posterior end just sucks for holding on.
The anterior end is the business end where a mouth that secretes an anticoagulant rasps into the skin and feeds.
It's extremely common to find leeches on turtles in Florida. In fact, it's so common, that if I had to go collect a bunch of leeches, I would start flipping turtles. 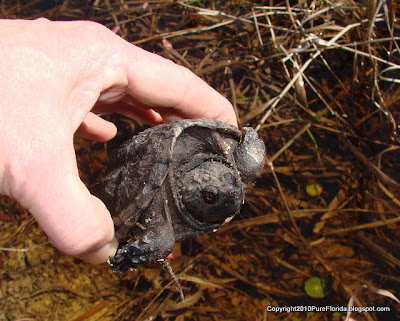 This snapper was probably just basking, since it was a chilly, but beautifully sunny day.
I'm sure he wanted to continue basking, but there would be other vehicles on this road on such a pretty weekend day, so I fiddled with mother nature by slipping him off the road and back into the water.
And then I proceeded on to my next turtle encounter ...

Email ThisBlogThis!Share to TwitterShare to FacebookShare to Pinterest
Labels: Animals

I've never encountered a leech, though I'm sure they're around here... the snapping turtles have managed to eat all our Runner ducks except one, so I'm not too happy with them at present!

You had me right up until the leech....ewww. lol
We do get to see snappers too, ranging in size from an itty bitty one about the size of a fifty-cent piece I found once to the coffee table sized ones we see crossing the highway to lay eggs

I've learned something new again. I didn't know there are two species of snappers. I'd only ever seen the larger alligator snapping turtle. Something else to look around for on my next trip to Florida.

I missed the leech as well, and its differential sucking apparati until you explained what it was. I think I'll stick with modern medicine.

Give that little guy about 10 years and he'll make a pretty good meal, The snapper not the leech that is!

That is the cutest little snapper!

I agree with Dani, that is the cutest little snapper. Do the leeches let go when they are full, or is this an ongoing affair?

Yes, indeed. In fact, I HAVE flipped turtles in order to acquire leeches for bass bait.

Is PFHQ entering the new "arms race" with datil bombs?

I never thought I'd say "how cute!" about a snapping turtle, but I'm saying it now. Most that I've seen are the full-grown, scary guys. And you don't mess around with THEM.

Rurality,
Oh my. You need a turtle trap.

3C,
They do get huge! Even these common snappers get pretty big.

Wren,
When I cut the tip of my finger almost completely off, I thought they might use leeches, but I still had real strong blood flow,so I missed out on that experience.

Dave,
I'm sure you are coveting the leech too.

Robin,
Mostly they do let go ...that's my understanding, although personally, I would hang on.

Troll,
Now how many people can say they flip turtles?
I think bhut jolokia wins in the scoville contest, but I would not want to be anywhere near a datil grenade either ... unless I had a plate of boiled shrimp.
Having been peppersprayed once, I prefer to just eat my scoville units.

Sayre,
Well, I do of course, but it's best not to.

Neat, don't see those that often but when we do, we stop and take a good look. You can keep the leech though.

they're so CUTE at that size! kudos to you for the rescue.

the last time i encounted a snapper, he was a bit of a challenge: http://a-moment-captured.blogspot.com/2009/05/at-least-turtle-doesnt-hate-me-probably.html

any day you rescue a turtle is a good day!

I learned the hard way that if you're going to move a gopher tortoise off the road, you better hold it away from you because it is gonna PEEEEEE!

Those young snapping turtles are so cute! But in my career I've learned one thing: Always respect a snapper's ability to stretch its neck in amazing ways. I haven't been bitten yet, but I have removed a lot of adult snapping turtles from fish trap nets. It's always an adventure!

eeew learned something new. :( leeches? in florida? ugh. Where and how can i avoid them?

Lisa,
It amazes me how far north these guys go!

Ericka,
My brother had a pet quarter sized snapper that out grew his aquarium and now lives in a pond in the University of North Florida campus.


Native Mom,
LOL! Yup, I learned that lesson too!

Deb,
These turtles have one heck of a geographic range don't they? I had never thought about that before.


JoJo,
1) Keep moving.
2) Never act like a turtle.
Seriously, I have never had one attach to me while wading or mucking about.

OK, if there was ever any doubt that I'm totally weird, I always kinda wanted to experience hirudotherapy. Except there can be complications and I don't like taking antibiotics. Cool turtle, anyhow, and I'm glad you occasionally interfere with mother nature.

Just goes to show that baby everythings are cute. But did you remove the leech.

Hey Floridacracker,
I am a biology student doing a parasitology class and would love to get a hold of a leech. Do you think you could recommend somewhere. I am in tampa.