Night Creatures Of St. Joe Bay, Florida. Let's Go Into The Dark Bay And See What's Going On Beneath The Surface.


This summer we spent a week on Cape San Blas near Port St. Joe, Florida. We stayed at this wonderful vacation rental house, called Bay Window.
The house, perched on pilings just a few feet from the water's edge, offers wonderful views as well as easy foot and kayak access to the clear waters of St. Joe Bay. 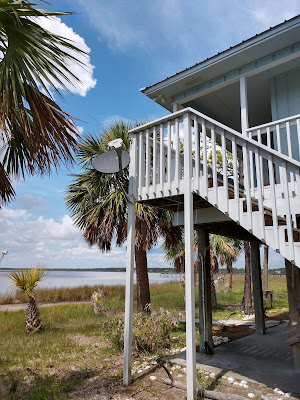 It is such a sweet spot!

You can walk downstairs and hit the bay without any driving, parking, traffic, etc. We kayaked and waded the clear bay over and over again. The house is just about 10 minutes from the actual Gulf Beach and T.H. STONE MEMORIAL ST. JOSEPH PENINSULA STATE PARK too.

We did bay and beach repeatedly during our week. 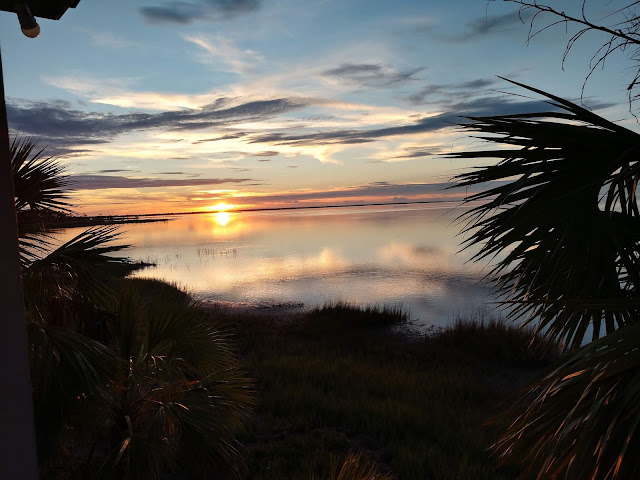 I did some of my bay exploring long after the Sun had set. 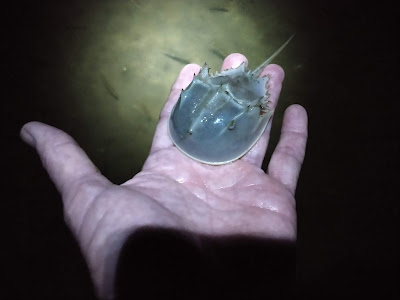 On the first-night wading expedition, I took only my headlamp and my GoPro Hero 5. The GoPro was attached to my 3-foot long expandable "selfie stick". That allowed me to plunge the GoPro beneath the surface and stick it right in the face of interesting (and aren't they all?) sea creatures.

The incredible thing about St. Joe Bay, besides the water clarity, is its shallow depth. There are vast stretches of the bay where you can walk for hours in water less than waist-deep.

The first night, I went out into the bay with only the GoPro on the selfie stick and my headlamp.
I was traveling light on this exploratory mission and it went great, but the headlamp gave a limited view due to its narrow beam.
I saw and filmed lots of cool animals, but ... what was I missing just beyond that tight circle of light?

Was I missing Fiddler crabs?
or...
...Southern Stingrays?

Luckily, I had planned ahead and brought my Ryobi One Plus 18 volt work light. This thing is awesome around the house and with a fully charged battery, it shines for hours.
Plus, it is fairly light in weight and would not be tiring to carry in my left hand, while I poked the GoPro underwater with my right.

It wasn't designed for this use, but the Ryobi worked like a charm. It was much brighter than the headlamp and opened up a huge area for hunting marine life.

On the second night, I took more gear.

First I put the kayak in the water just to serve as a pack mule of sorts. I didn't get in it at all that night, although I packed a paddle and could've if the need arose.

I tied a short length of a line from the kayak to me with a quick-release knot. That way I could walk and tow the kayak which was loaded with my flounder gig, life jacket, extra headlamps, my Florida Fishing License, and a few other items.

Now I only had to carry what I was using at the moment and I had a stable platform when I needed to set things down and tweak things or drink a little water.

I didn't hit the water until after 11PM and I stayed out on the water until 3:30 AM.
It felt like a much shorter time, ... so much was happening out there.
EVERYWHERE  there were horseshoe crabs of all sizes... even a blueish one. Some were hooked up waiting for the spawn, others were cruising and digging for food.
It was deliciously dark and quiet all around except for my light which was mostly pointed down.

The fish! So many kinds, bay anchovies, pinfish, killifish, mojarra, hardhead catfish, ... even a huge seatrout ...definitely a keeper.

One of the weirder moments was as I was taking a break and was holding the Ryobi light a little more horizontal than straight down. I was out pretty far on a grass flat and in the deepest water of the night which was about waist-deep. Suddenly, off to my left, two sets of glowing red,... I mean CRIMSON RED eyes were heading my way.

It turned out to be two Ladyfish on patrol.
Really impressive.

At this point, you might be thinking, "What about that flounder gig ...did it get used?"

After about four hours of wading, filming, exploring, and yes, looking for flounder, I had not seen the first one.
That was okay with me because I was having a blast just being out there... living deliberately.

On the way back in, as I approached the shoreline directly in front of the BayWindow house ... there he was.

A Gulf Flounder, maybe 16 inches nose to tail. In Florida, Flounder only have to be 12 inches to be legal (TOO SMALL FLORIDA!), so I could've gigged him, but what would I have?
A single small flounder at the end of the night who would not feed 2 people and would need to be filleted before I hit the rack... and I was ready for some sleep.

So, I let him live to feed and grow.
And that,... THAT was the perfect ending to a perfect night in St. Joe Bay, Florida.

The video below is a composite of video clips from both nights.
Come along with me!

Words fail me. So far beyond awesome! I had no idea that horseshoe crabs could move that fast or that the pointy end of the whelk went first. Great videos, wonderful story, thank you!

I am absolutely loving your gorgeous blog!I love this blog.Thanks for sharing.