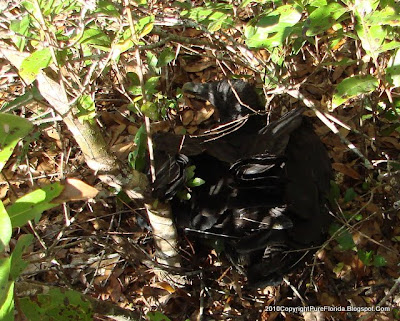 Bear and I had just broke into a gallop as we jumped off the porch and headed for a jog/walk/run around PFHQ when it happened.

A black vulture sat directly in the middle of the trail, helpless, and unable to fly.
Bear saw it first and lit out for this amazingly large "chicken".
(Long time readers know Bear has a "chicken problem"... he's better, but once a chickenchaser, always a chicken chaser)

Luckily, I had Bear on the 30 foot leash we use for our outings, so I was able to put the brakes on his rush to the vulture.
He managed to scare it into some scrubby brush, so while the vulture tangled itself in the scrub, I put Bear back in the house.

I returned to the vulture with a large beach towel, which I draped over him after untangling him from the brush. I did not see an obvious injury, but he collapsed a few times when fleeing Bear without ever leaving the ground.
Whether it was leg or wing that failed him, I could not tell. 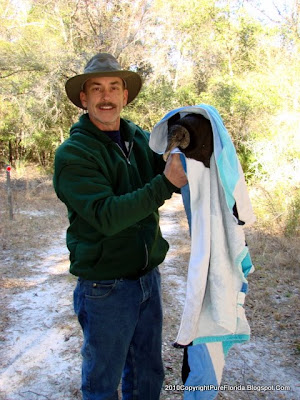 Black vultures stink like road kill ... what a surprise.
They also have very flexible necks and I can now add vulture nips to my list of bites and stings delivered by Florida's critters. 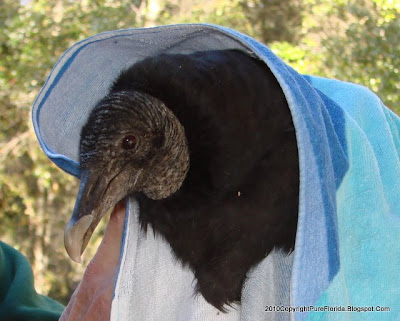 I called the FWC (state game and fish folks) for a nearby wildlife rehabber. The lady gave me a number for some folks south of here, but a message on their answering machine was never returned.
I don't really know the extent of the vulture's injury/sickness. It's been cold, really cold ... in the 20's last night so that could be a factor, but the vultures at Manatee Springs this morning were flying and sunning as if the cold were no big deal.

(Yes, I already used my park pass, No, the manatees were not visible)

On the internet, I found a 24 hour wildlife rescue center in Gainesville. Since I have to drive that way tomorrow, I'll drop this black beauty off on the way through town.
IF it survives the night. 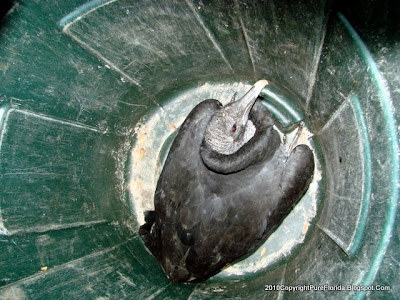 In the meantime, it's in a quiet, dark holding area with comforting, familiar smells.

I hope he makes it too. They sure are ugly, but I can't imagine how bad our street would smell in the summer without our buzzard clean-up crew.

They might stink but he sure is cool looking. I love his face.
Hope he survives!

Turkey Vultures are so ugly!

What a lucky vulture, to be found by you. Although I'm sure he didn't think so at the time.

What a sweet looking love! Hope it hangs in there.

I wonder how many vultures they get. Not everyone would think they were worth saving. He's lucky he found you.

I hope he makes it. Like the others have said, it is a good thing that he found you.

Well, he is lucky that you found him and I hope he makes it. Glad you had a good Christmas and Happy New Year to you!

Well? Did you take him out to Boulware Springs? Near La Chua Trail.

I love all the big birds down here in Florida and have never seen a vulture up close. Poor guy! So sweet of you to put him in a comforting garbage can! I love your comment about the 30 foot leash...is that all? Progress reports please!

They always remind me of really big chickens for some reason.

The vultures are John's fave. Every year for Christmas he gets something vulturish. This year I found a cool wooden handcarved one for him.

Good luck to your very stinky friend. I hope it's a very successful rescue and rehab. Keep us posted.

nice hat. on you. not on the bird. altho the bird looks good with a hood.

Poor guy... They may stink to high heaven, but they definitely have a purpose here. This one is rather handsome and they are just glorious in flight! I hope your Gville place can take him.

even vultures need a hand onc't in awhile.

You haven't lived till you've had a vulture vomit on you and since you didn't mention him trying, he probably hasn't eaten recently.Hope you washed those nips well as they have nasty cooties.
There was a period this fall when vultures were showing up all over the place weak and lethargic.Can't remember what they thought the problem was?
I had kind of hoped it was nature's way of culling the flock of the car eating black vulture clan-but they are still regularly eating cars in ENP.

Many (all?) northern turkey vultures overwinter in the South, so that may explain why myamuhnative saw so many tired birds when they first arrived during that particular "period this fall."

Of course, FC's bird is a black vulture, not a turkey vulture.

Nearly all mammals and birds die during their first year of life, which is something we humans have figured out how to get around. I would be interested to know if this animal is a young-of-the-year individual.

Y'all,
In today's (12/30) post,I think I have answered the, "What happened next? theme running through your excellent and much appreciated comments.

to follow up on Buford-the vulture issue had something to do with toxicity. its not common to be rescuing vultures out of Florida bay even with the huge numbers that winter here.
And I don't think your guy was a first year because he has lost all of his head feathers.young uns have really cute wispies before they go fully bald.