The Sun Is Setting Rapidly On Old Vilano Beach 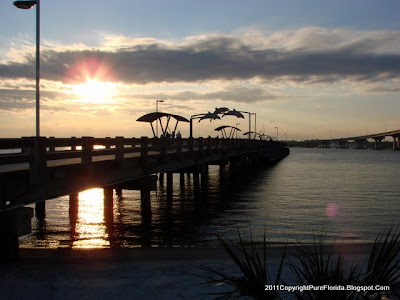 This fishing pier is actually the east end of the old A1A bridge over the intracoastal waterway at Vilano Beach, in St. Augustine. St. Augustine has no shortage of nearby beaches, but when I was a kid, Vilano was always the quieter, laid back, funkier beach.


There was a distinct difference that you could not help noticing when you crossed this bridge and landed at Vilano as opposed to crossing the Bridge of Lions and landing on Anastasia Island.

Anastasia Island was often simply referred to as "The Island" ... epecially that portion directly across from downtown St. Augustine, an area known as "Davis Shores" after a a developer named ... Davis (surprise!) pumped sand over the pristine marshes, dug some canals, and sold lots back in the early 20th century land boom.

It was said that "God lived on The Island".


God may have had one of those expensive bayfront homes on Anastasia, and later perhaps a condo on St. Augustine Beach, but I don't think she had any Vilano Beach real estate holdings.


Although, I may be mistaken on that, I hear she works in mysterious ways.


Vilano was very different from "The Island".

Vilano was more of a "regular" (not rich) folks beach community with a lower population of doctors and lawyers. Due to a bodacious surf break, it was home to scores of surfers who only added to the funky character of the little community. 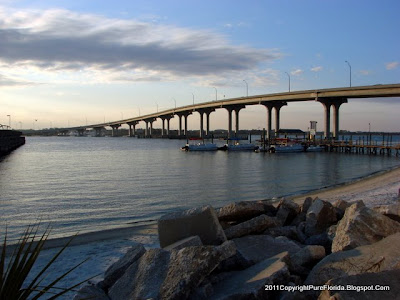 Today a high rise modern bridge replaces the old lowslung drawbridge that still partially exists as that fishing pier. This "new" bridge zips you across the intracoastal waterway in minutes, and while it does offer a brief high speed view of the ocean, there is no drawbridge to force you sit and watch the dolphins as you wait for a boat to pass.

This is the price of efficiency.


To be fair, the old draw was a little fussy sometimes and since it lifted a section of the bridge straight up, if you ignored the crossing arm you went straight into the drink.


When you consider the fact that for a very long time, there was a bar called the "Lazy Sands" practically at the foot of the bridge that had a drive through window for mixed drinks served in a "to go" cup ...then you can imagine how a drawbridge might consume more drivers than expected.


Like I said earlier, Vilano was a different place. 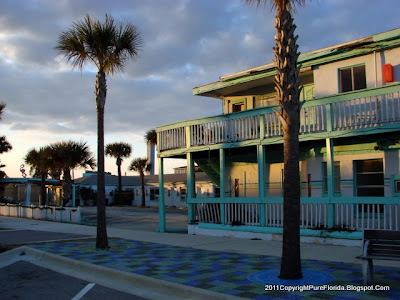 Exhibit A for the exquisite funkiness of old Vilano is the building above. 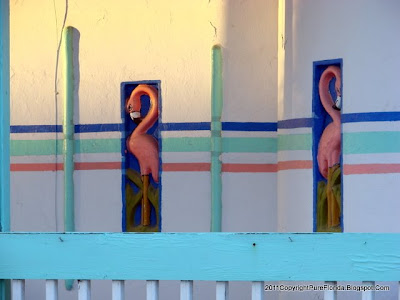 All around this old motel, set into the walls, are pink flamingoes. They are not just paintings but three dimensional sculptures. 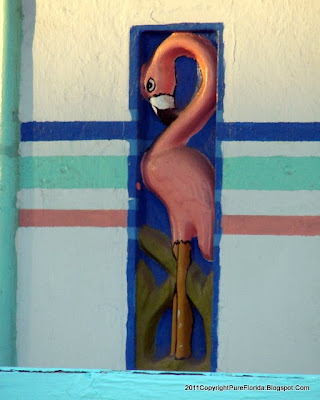 The building is chainlinked and posted with no trespassing signs. The flamingoes stare out from behind the fence like sad, captive birds at a zoo.
Sadly, I think these birds are an endangered species. I'm sure this building is waiting it's demolition.
Losing this kind of folk art is painful to me. Having built things, carved things, and painted things, it occurs to me that a lot of effort went in to making and painting these. Flamingoes are everywhere at this old defunct motel. 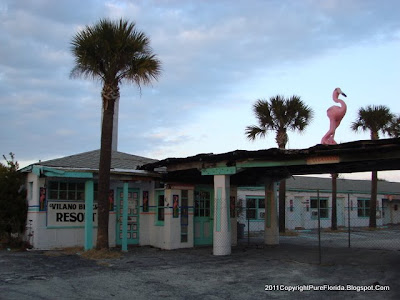 Near the office, a giant pink and almost scary looking flamingo watches for customers who no longer come. 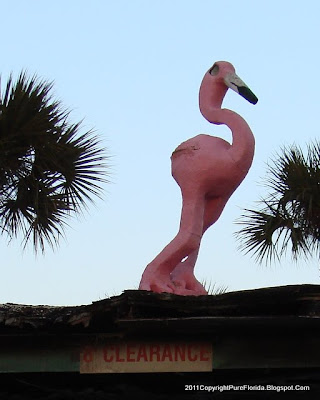 Today's customers are across the street at the megageneric motel. 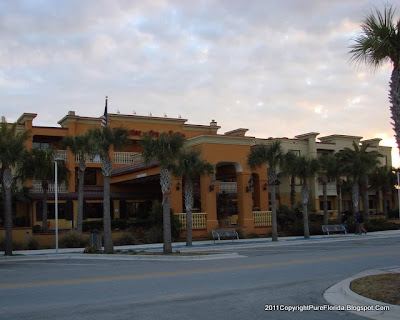 It doesn't take much imagination to predict that a similar motel may take the place of the old flamingo encrusted Vilano Beach Resort. 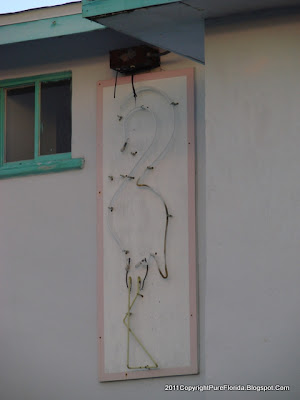 There are even electric flamingoes who once positively glowed with a welcoming neon radiance.
Can't you just hear the crackly buzz? 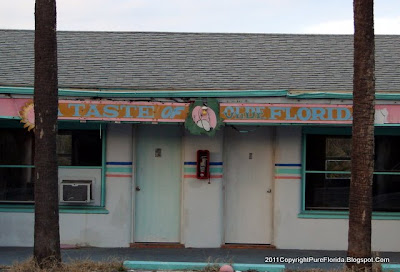 Do I need to mention the irony of this sign at the motel?
I didn't think so. 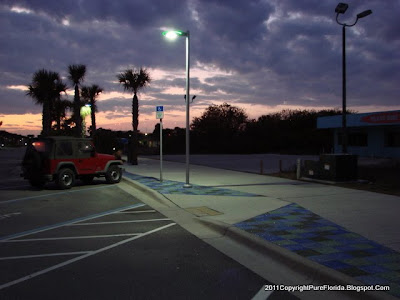 The sun was almost gone by the time I finished my walk with Bear. We spent too much time photographing the flamingoes and the sun did not wait.

In the gathering gloom, I grabbed one last shot. 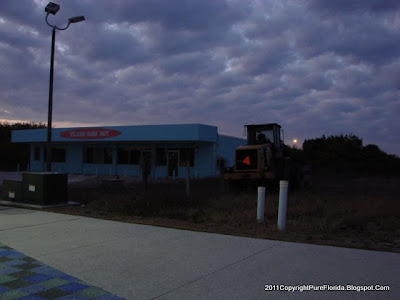 A huge modern supermarket will soon replace this surf shop according to the "Coming Soon" sign posted on this block.
The bulldozer waits.
The sun sets.

So sad. Thanks for showing us what's left of Vilano. Too bad the carpetbaggers slithered in.

They should sell those flamingos - I'd buy one.

There are still some of "old" Vilano left - they're just harder to find. Aunt Kate's - which is the reincarnation of Oscar's - sits next to the fish camp and boat yard of the old "Victory fleet". Guano dam and the new marine center are still a great place to wander and fish.

The rest of the drive up A1A is very depressing.

I loves me some flamingos!

The St. Augustine Historical Society should save some of those flamingos, particularly the electric ones.

One of the highligts of my first visit to Florida was going to St Augustine! It is sad to see buildings going into ruin or bulldozed! I am glad you weren't hurt when the vulture went into your windshield! One of my girlfriends had a turkey fly into her windshield.

Vilano is my favorite beach. I love the shell sand and peacefulness. I hate how it has changed over the years. Is that the hotel where the TV show was filmed?

FC,
Where to start....
Ok us Islanders gave up our rights to have a beach when the morons who run the county decided to give away bird island to the state. Something about manpower and a mouse. Now we only have "yankee beach" and A street, they are closing Matnazas to driving also. Soon the only ones enjoying our beach will be walkers, rich land owners,and condos, just like Vilano. Hardly anyone can get on Vilano anymore because they closed all the ramps, except the one at Vilano. Sorry you left out the parts about the parties at the boat ramp and "The Point". Of course young people are no longer allowed to gather at the boat ramp after dark, and "The Point" now houses some of those doctor and lawyer houses that you bemoaned about on the island. Too bad they didn't go for efficiency when they put in our "new" bridge downtown. The went for the replica version, except they kept the old drawbridge, which still gets stuck. Needless to say, we have very poor, short sighted politicians in St. Johns county, oh wait, they're everywhere. Thanks for the memories, I think.

So sad to see "progress" like this. That flamingo motel should be on the register of historic sites!

Are any of those flamingos salvageable? It would be nice to see them move on to another place. I wonder what was on that spot before the Flamingo Motel was built? "Progress" is not always a pretty thing.

After a drive through the Lazy Sands we drove straight to Porpoise Point:-}}
Still waiting for a good Northeastern to clean up the Point!

What a lovely and sad post. Those 3D flamingos are gorgeous--they deserve to be saved!

That was one scary flamingo!
Bummer about the Jeep too!

*Sigh* yeah, if they have the chainlink fence up then it's only a matter of time. I would bet though, that if you were to be around near the time they start the demo, and you could talk to some of the demo guys, I believe they would let you have some of those flamingos. I'm not sure how hard it would be to remove the carved ones but the neon ones would be easy. We often let people take mementos from buildings we demolish.


Pablo,
See while you still can!

Moultrie,
I agree with you!


Dani,
How could you not? LOL!


Lisa,
No, the vulture was the one who got hurt ... as in dead.
I have a new windshield as of yesterday!

Patio,
The shell sand is unique. Bear and I were sinking in it just before these last pictures were taken.
Not sure about the show question.


Deb,
I think the thing here is, in a city about to celebrate it's 450th birthday, little concern is shown for more recent history. Love that new hairdo.


Robin.
I think sand dunes. Which, is still my favorite beach construction project.

Treehugger,
As for the northeaster/hurricane ...never give up hope.
I left out the "top secret" part of Vilano. Some place and events are in the "you had to be there" category. :)


Dave,
All fixed! Shiny clean new windshield and it didn't cost a penny.

Hey Annie!
Thanks!
It could be that the owners have some salvage plans. I have no idea, since I don't know who owns the place.

Felicia,
Oops, clicked publish before responding to you. Thanks! I agree, they are too classic Florida to be lost.

The Pure Florida book. This has got to be a chapter. I love this post.

I'm a Green Cove native (age 54) and Vilano was where many of the families I knew (who could afford such things) had second homes. They had their own little community there. I knew quite a few schoolmates who spent every summer at Vilano and sometimes beyond - commuting from there to Clay High every day as long as the weather stayed warm. Used to drive over and catch the tail end of hurricanes as they departed. Good times.

Marc,
Vilano was the affordable beach for a long time I think. Always kinda painful when someplace neat gets "discovered".

What Miz S said. Writing from a generic pseudoItalianatearchycolumny taupe and tan structure, loving the funky and old, too. Thank you for this glimpse of the soon-to-be razed but character-filled taste of olde Florida. It has been a delight to discover so many people of conscience and roots in a place full of come-from-aways.

My Aunt and Uncle owned the Lazy Sands. sad times have come to Vilano