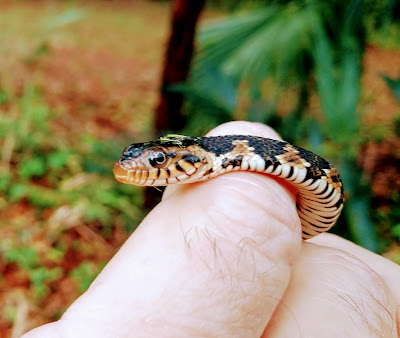 Last weekend was pretty stormy with rain, wind, lightning, and lots of warnings from the weather folks. I managed to garden in between storm events and at one point I decided to try another Powers Pond Turtle Cam setup... even if it was a grey rainy day.

So, during a pause in the crackalacka from above, I dashed down to the pond with a bait cage stuffed with old bread and some chicken bones. I staked it down as before, turned on the GoPro 5, and left.

It was storming pretty hard when my phone alarm went off signaling that the GoPro's battery should have run out. There was too much lightning to risk it at that time, so I just let the rig soak until the storms calmed down a few hours later.

Then I headed out to the pond.

I always creep up to the pond edge, just in case some critter is out and about. 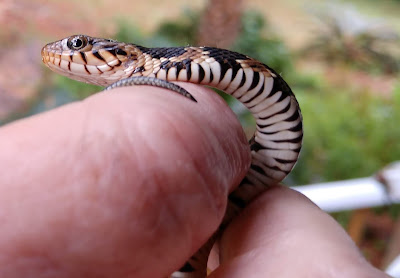 That paid off this time because swimming around the GoPro turtle-cam setup was a tiny young Florida Banded Watersnake (Nerodia fasciata pictiventris). It was probably attracted to the schools of Mosquito Fish (Gambusia affinis) that were feeding on the turtle bait. 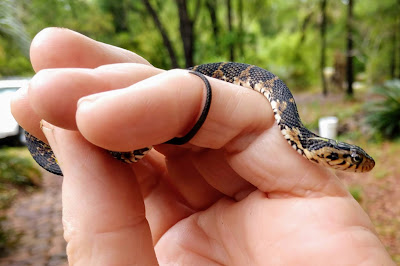 The tiny noodle of a snake ducked under when it saw me, but immediately circled back ... and then swam under a mat of filamentous algae.
Hmmm ...
I moved down the bank a few feet in the direction the snake was moving when he submerged.
I waited.
A few moments later, the algae mat to my left began to stir.
I moved into position, leaned over, and positioned my hand just above the wiggling algae.
Up he popped!
I swooped in and snatched him up!
Yes!
For the next 15 minutes or so, I filmed the very patient and calm baby snake from all angles.
After that, it was time for him to return to the pond, so I gently let him gracefully swim off into the pond.
I was so stoked, I haven't even reviewed the GoPro turtle-cam setup yet.
But there is a Baby Water Snake Video below if you want to see him in action.
Just click on the link.
Baby Banded Watersnake!