Kayaking The Wekiva ... part one

I slipped away on Sunday for a bit of kayaking down in Gulf Hammock. My plan was to launch at the Gulf Hammock boat ramp on the Waccasassa River and paddle upstream until I came to the mouth of the Wekiva Run.

Florida has two Wekiva's, the best known is the central Florida river and state park near Orlando.
My Wekiva is a spring run also, but without state park protection.

This derelict shrimping vessel was in my second post back in 2005.
Several tropical storms have taken their toll on her and she's changed alot since '05. Not so picturesque these days and a potential oil spill and definite eyesore now.

It does seem as if the owner would be responsible for salvaging the vessel and getting her out of this river, but still she sits. 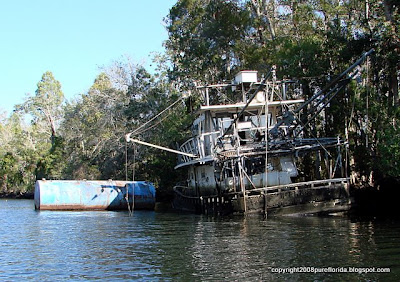 It was a T-shirt (sleeveless of course) day so all the gators were beneath me somewhere and not sunning on the banks. 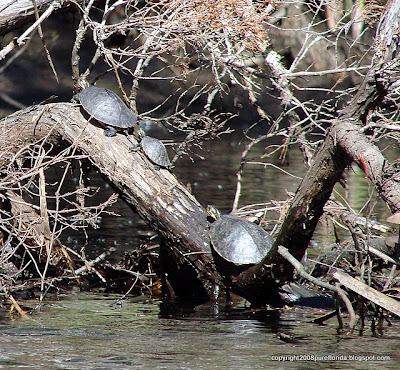 Even if the gators were warm enough to be uncooperative photos subjects, the turtles were easy prey. There was alot of plop-plopping as I cruised closer for a pic. 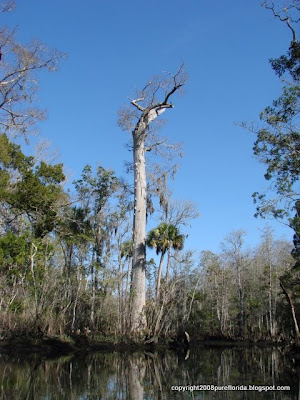 The scenery along the Waccasassa and the Wekiva is pretty sweet in a subtropical way. Although most of the big cypress trees were logged out of here back in the day, a few were missed and left to tower over the forest where they dramatically accentuate the puny nature of "normal" sized modern trees. 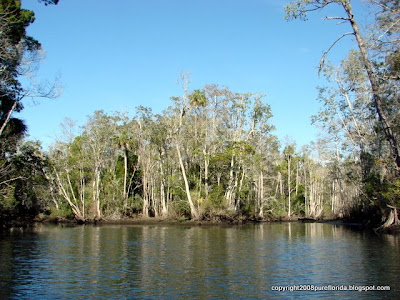 I cruised upstream on a low tide until I came to a fork in the river ... did I go left or right?

That is the question.

And, I will have pictures of the deflowering of the previously unfishy fishing kayak ... can't say that anymore.

Plus a wee video or two of the river.
Posted by R.Powers at 5:00 AM

Today was great, looking forward to tomorrow. Sure is nice to see water that isn't under ice and critters that aren't in an aquarium

I wish we had a time machine.....would love to have seen the mighty cypress back before logging.

Whichever way you took I can't wait to see the pictures! Love the turtles.

Question. Do you know what the arched structure is on the corner of Holmes and King St? Was it an old entrace to an estate? It used to be on the opposite corner and was moved several months ago.

Sleeveless in January...and the living is easy.

Perhaps there is some bureaucracy you could nudge about the ship on the river before it spills oil? Perhaps a little nagging is in order - some pictures in a local paper, perhaps - the squeaky wheel gets the grease, etc. etc.

3C,
No skating here yet!

Dani,
We have a giant of a cypress tree here in Goethe State Forest. Another post!

Pablo,
Yes, there were sand gnats at the end tho.

Suze,
Yes, I need to check with the water management district.

Sure is pretty there. Nice place for a paddle up and down stream. Which way did you go? I'll guess you went right.

Some of the old Cypress trees are huge, I don't know if they will ever be replaced.

It's fun catching up on several posts in a row around here. Clearly, we're all getting the most out of your new toy. I believe you probably chose the fork less traveled...can't wait to see.

Going back, it was the St. Clair River in my grandfather's boat, leading into Lake St. Clair, one of the not so great Great. And he would let us steer.

The pig is looking good. I'm making a point of not getting too attached to her, but the back eye is endearing. I think last year's was smarter, though.

Now I want to cook a turkey. We bypassed our usual Christmas one, done in addition to a ham. Think I'll find a small one to do as soon as it cools off a bit around here.

We've swum many times in the portion of the Wekiva run that goes through Henry Beck Park.

I say you went right.
And we are are "lucky" enough to have have huge cypress trees in our back yard.They can be a nuisance and messy,but are certainly magnificent.

I always find it interesting when you talk about paddling upstream. You could maybe do that in a few places here, but most of the time you gotta plan on going with the flow.

Robin,
You are right... right.

Vicki,
I agree on your pig prediction. Cute eye, maybe not as smart, or maybe I have not spent as much time with this one.
Cool weather on the way, start your turkey!

Alan,
Nice to see you back in the fray!
Yes, Beck park is neat, but the last time I checked, no canoes or kayaks allowed.


Chris and Jon,
Definitely lucky. I have young ones here that my babies and I planted years ago. Someday ...


Deb,
I waited for someone to mention that aspect. With little relief, most of our rivers run slow and paddling upstream is very doable.

So cool, I think we will all enjoy your new toy almost as much as you are! :)