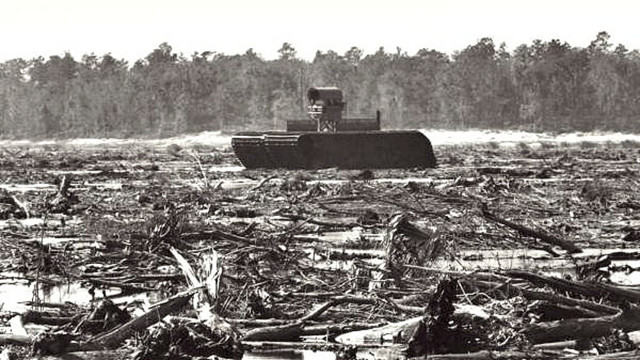 The last time we talked, I was paddling through the stump forest in the historic Oklawaha River channel.
A cyclic drawdown of the large and artificial Rodman Reservoir had exposed both the old river path and the stumps of a forest long gone.

The machine in the photo above (a photo from Google images) is "The Crusher"... or "The Monster" ... 300 tons of forest smashing steel. It was much bigger than it appears in that distant photo. On Google, there is a photo of a girl standing at the foot of it for scale ... go seek it out.

The machine was built for the express purpose of both knocking down the river floodplain forest and smashing the trees into the ground so securely that they would just stay there and rot when Rodman was flooded by the dam.

Plans look so sparkly on a drawing board, don't they?

Once the forest was flattened and the river backed up behind the new dam, the trees began popping up until Rodman Reservoir was a minefield of floating logs.

This made boating in the reservoir a risky proposition for a long time and even today, logs still create navigation challenges. 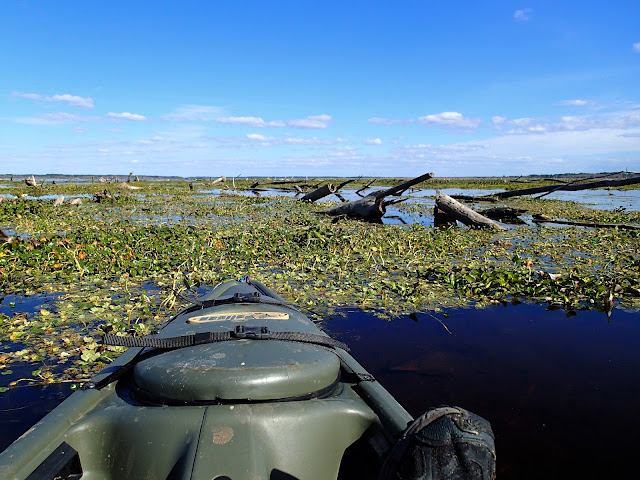 So, while on one side of the barge canal, the ghost forest exists as vertical, broken, but still rooted stumps like we've seen in the earlier posts, ...on the other side all the trees are angled or horizontal.

Even with 7 more feet of water above this area at "full pool", plenty of these logs could be an issue for motorized boats.

Rodman is also heavy with exotic, invasive aquatic plants like hydrilla, and water hyacinths among the Crusher smashed logs.
They contribute vast amounts of organic matter to the reservoir which creates much of the black muck on the bottom.

But what about this strange crushed side of the canal?

The flattened side of the barge canal was very shallow due to the drawdown so even in a kayak, I found myself constantly steering around submerged logs, hyacinth clogs, and dead ends. 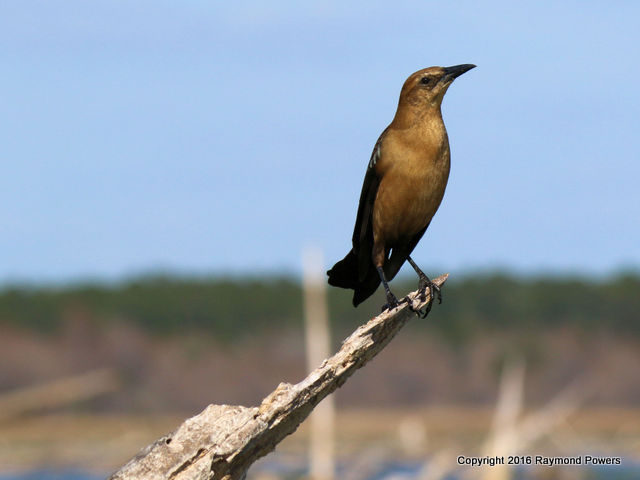 There were beaucoup grackles perching, flitting, and hunting "things" down among the floating hyacinths.
I know they're just grackles, but I like their personality and sleekness.
They were good company. 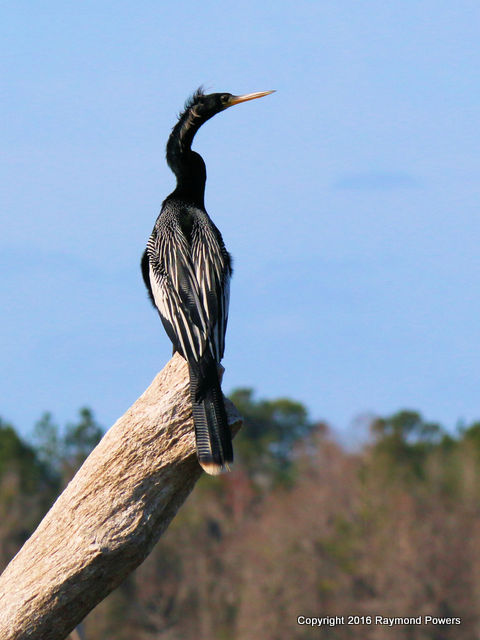 I'm a fan of anhingas too and this one let me drift pretty close before lifting off. 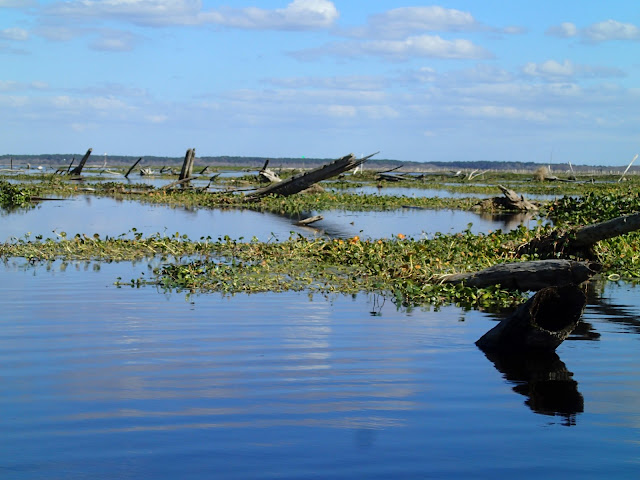 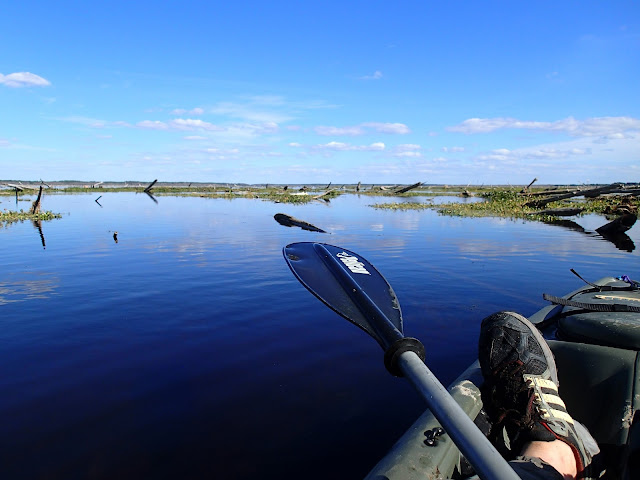 Looking out over it, I pause and drain the water with my imagination, let ... or better yet ... help the forest come back with some good restoration plans, and imagine ahead a hundred years to a restored Oklawaha with a maturing forest where now there are only dead stumps. 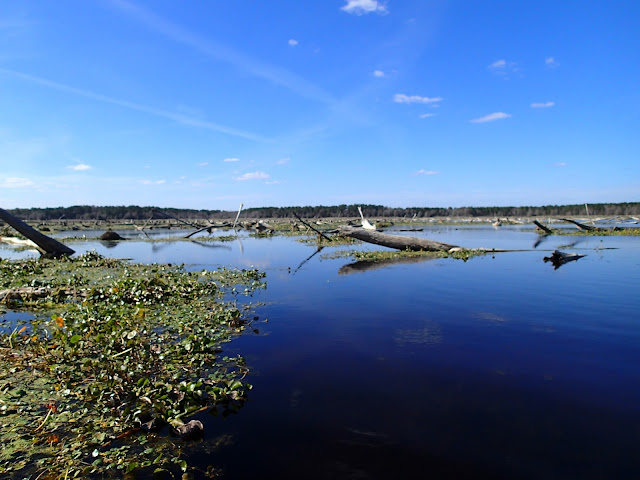 I'm not sure the long view is very popular right now in an era of instant gratification and over development.
I know this, we would have no Yellowstone or Everglades today if folks in the past had not taken the long term view long ago.
Folks in the late 1800's, fighting to establish National Parks ... they were thinking of me before my grandparents were born.
Question is ... do we still do that? 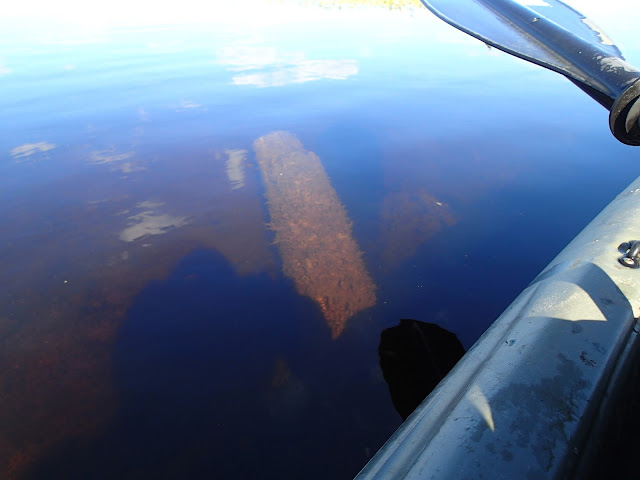 Thing is, I don't want my future great-grandchildren to see the lower Oklawaha like it is now with an artificial eutrophying Rodman Reservoir.

I want them to see the springs buried beneath this artificial lake and a mature cypress forest outlining the curving path of the Oklawaha River.

And yeah, they may have to work a little harder to catch a big bass than anglers in Rodman do today.
Fish in a river are not a captive audience.
I'm okay with that.

There will still be plenty of fish with a free river, as there is today in the flowing Oklawaha upstream from Rodman.

And there will still be awesome critters like the banded watersnake below.

He kept popping up to breathe while I was parked, imagining the dam gone and the river system restoring itself. 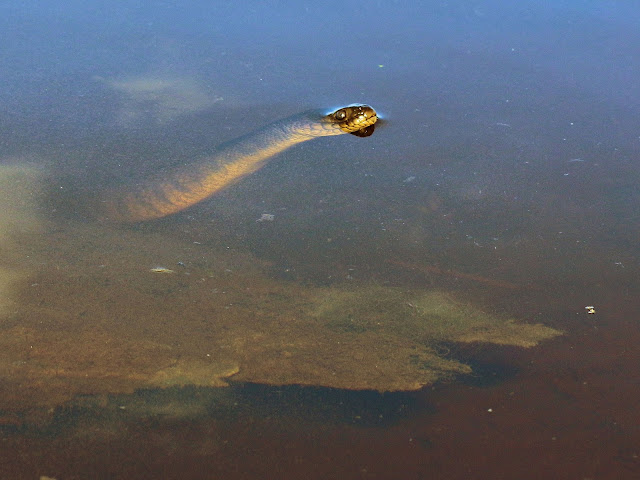 The first time he popped up, I thought, "Dang it, I missed him!"

I sat for a bit, and in a minute or two he popped up again ... and I missed him again.
So, I let the kayak drift a little closer to the sunken log that he seemed to be working for crayfish or other tasties. 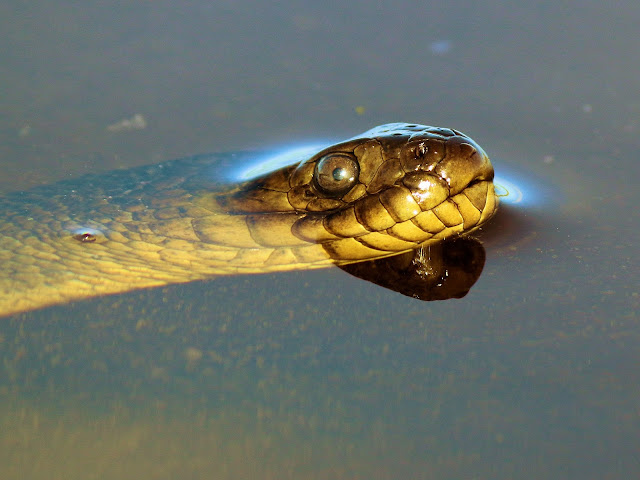 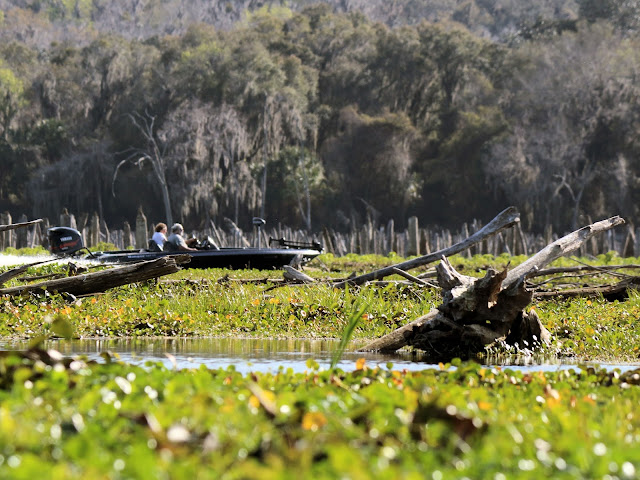 I like this last photo of episode 3, because it's a nice little sandwich of the crushed forest bog clog side, the barge canal with a bass boat zooming through, the stump forest on the Oklawaha channel side, and, last but not least, the upland forest beyond.

In the final episode of Rodman Exposed, I chase the Eagle.
Posted by R.Powers at 3:52 PM

Not gonna lie. This post made me a little teary-eyed. Thanks for the cool stories and the perspective. Always appreciated.

You have such an understanding of the story behind the story.

Always a good thing when photojournalism leads to activism. I am horrified that we have invented such a thing as a forest crusher. Up here in Ohio, we have a highway sign that says Big Muskie Bucket. There's a shrine to the giant scoop that strip mined so much of Souheast Ohio. Yay. Thanks for the lesson and especially the long view, FC.

This is such a beautiful and compelling journey. Thank you for paddling out there, taking these stunning photos, and for writing it all down.

Sat down for a little break from packing to head north for the season and came by to read this 3rd episode. I'm loving the journey and the photos, esp. the last photo. Most of all I love that for more than a dozen years, as I always come back to this florida I feel so ambivalent about, you are here helping me enjoy it, protecting it, explaining it, illustrating it. For me, Florida would not be the same and all that it is without PURE FLORIDA. Thanks, Raymond!

I think of these things often. What if our ancestors, had not done this or that. How would it look today?
My great grandfather was an engineer. He cut virgin timber off Carabelle Island in the early 20th century and also in the Okeefeenokee Swamp. Makes me sad.
Tammy in LA

Thank you all for the comments on this series. One more to come, but I want you to know that I read and appreciate your input.

Your composing is purely awe-inspiring that I desired to read such high quality material...Houses for Sale Ocala